I published this post on The News Hub last night, but now I get to post it with a photo of dancing tampons, following this morning’s protest (my favourite sign is second from the left). 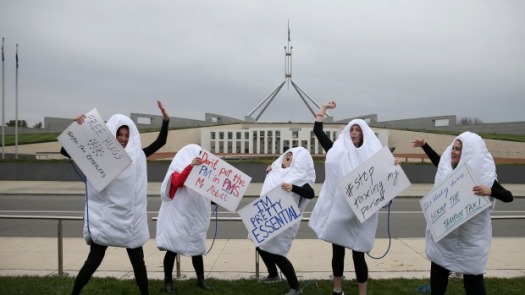 If you’re female, you know that periods are annoying, uncomfortable (comedian Cameron Esposito summed it up pretty well), and we’re pretty much stuck with them from the ages of roughly 13-50. But lately,  the Australian government’s finally starting to catch onto the fact that it might be nice for us to not have to pay an extra 10% for something that’s unpleasant enough as it is that we have no control over. If you’re wondering what this ‘tampon tax’ is that keeps popping up in the headlines (often followed by puns like the one above), here’s everything you need to know.
What is the ‘tampon tax’?
As alliterative as it is, the term ‘tampon tax’ is a little misleading.
It’s not a specific tax just for tampons- tampons and other sanitary items currently fall under Australia’s GST (Goods and Services Tax), which adds an extra 10% onto all products and services, with a few select exemptions.
Why should sanitary items, out of all the things that are taxed right now, be exempt?
Condoms, lube, sunscreen and nicotine patches are all exempt from the GST because they’re classified as “essential health products”- don’t get me wrong, they’re all important things that should be cheap and readily available, but there seems to be more of a political agenda going on here. Being seen to be cracking down on things like skin cancer, unsafe sex and smoking probably gets you more political points than “women’s issues”- particularly to a party that doesn’t have the greatest track record with women and is currently being run by Tony Abbott. If you’re not familiar with who he is, allow John Oliver to explain.
Why is it only becoming a thing now?
The Federal government is currently reviewing our tax system, ostensibly to make it better and fairer (which hasn’t exactly been their strong point but let’s see how it goes). And one uni student, Subeta Vimalarajah, took this as an opportunity to start a petition on Communityrun.org calling on the government to abolish the tax on sanitary products because ” a period is not a luxury or societal burden, it is an aspect of reproductive health. After all, the government should support and facilitate the availability of sanitary products, not actively restrict it.”
At last count, the petition had 96,504 signatures.
How does Australia compare to other countries in this department?
The UK: Tampons and other sanitary items are taxed at a 5% ‘non-essential, luxury’ item VAT rate (although it was cut back from 17.5% in 2001), while according to a similar UK- based Change.org petition, men’s razors, crocodile meat, and helicopters are all exempt. You know, just essential everyday items we all use.
The US: It varies from state to state. In New York and California, sanitary items are taxed, but in Maine, Pennsylvania & New Jersey, they’re not. They’re still not as accessible as they could be, though- women on low incomes occasionally have to resort to selling their food stamps for them,and there’s a pretty serious shortage in women’s prisons.
Ireland: Tampons, pads and panty liners are all zero-rated, a rate that was in place before the EU introduced minimum VAT rates.
What are the chances of the tax actually being abolished?
It’s hard to say right now. On Monday night, during his appearance on Q&A( a panel show featuring prominent guest speakers in front of an audience that gets to ask them questions), Treasurer Joe Hockey indicated that he would take it up with the states at the next treasurer’s meeting in July.
But less than 24 hours later, Tony Abbott said that removing the tax on tampons was “certainly not something that this Government has a plan to do” and that it was “a matter for the states”.
If the issue ever did make it to parliament, it would most likely pass without too much opposition, given that both Labor and the Greens support it, as so many of the states and territories.